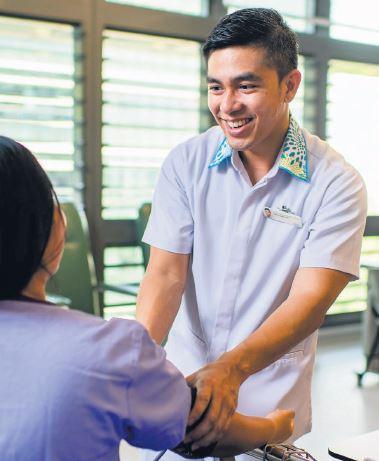 With Mr Muhammad Faiz‘s warm smiles and friendly demeanour, many would not have thought that he was once a stern-faced captain in the Singapore Army.

The senior staff nurse from Woodlands Health Campus (WHC) made the career switch almost three years ago after serving in the force for eight years. Instead of managing a group of military men, the 32-year-old now supervises WHC’s pre-operation wards, helps with quality improvement and patient safety at the hospital and mentors junior nurses.

WHC broke ground in April 2017 as the first integrated health campus in Woodlands.

Given Mr Faiz’s qualification and experience in nursing, the career switch was not too drastic for him. The Army had sponsored his three-year nursing degree and he was subsequently posted as an infantry officer. It was during his stint as an infantry officer that he realised even if he was not sent on overseas military missions, he could still contribute to the country and society by putting his nursing skills to good use in the healthcare sector.

It was a difficult decision to leave a career he had enjoyed and mentors who had helped him but his parents and wife gave him their support and blessings, which helped him with the transition.

While the two careers may seem worlds apart, Mr Faiz explains that the training he has received in both is applicable in either field. To him, serving in the Army and nursing requires adhering to a high level of strict protocols and guidelines. When it comes to dealing with people, both jobs require one to be patient and compassionate, as well as be able to build good rapport with others.

When asked if he felt he should have joined nursing earlier, he said: “I think my time in the force has prepared me to be a better nurse – more resilient, adaptable and disciplined. I am also older than an entry-level nurse and I think that maturity makes me more relatable to our older patients.”

To Mr Faiz, nursing has given him the priceless privilege of being part of his patients’ journeys – helping and being there for them during their most trying times. While he is working to further hone his management and clinical skills, he also looks forward to welcoming new nurses and showing them the ropes at WHC.