Soaring without having to fly

Think careers in aviation and aerospace, and the first thing that comes to mind is pilots and cabin crew. But Mr Calvin Kuah is neither.

The 30-year-old first discovered a keen interest in aviation and aerospace during his student internship days with CAG, where he discovered just how multi-faceted the industry really is.

“I was always intrigued by the prospect of working at Changi Airport, which is well-known for being more than just a gateway to Singapore. But it was my internship that afforded me a valuable behind-the-scenes glimpse into CAG as an airport operator with multiple roles, such as air hub development, master planning and commercial activities, besides just airport operations,” says Mr Kuah.

After graduating from IMI International Management Institute in Switzerland in 2014 with a Degree in International Tourism and Event Management, he decided to follow his passion by returning to CAG, where he has lent his insight to numerous operations initiatives.

During his first major project on the job in 2016, he and his team conceptualised the common early check-in service in Changi Airport, making it one of the first airports in the world to offer such a service. Passengers now have Mr Kuah to thank for being able to check in as early as 24 hours before their flight.

Aside from brainstorming initiatives to provide better travel experiences for passengers, Mr Kuah also oversees key expansion projects such as the upcoming expansion of Terminal 2 (T2), during which he will be responsible for managing the transformation of its departure check-in hall — which will include a revised check-in layout, equipped with more automated check-in kiosks and bag-drop machines to improve operational efficiency.

The entire expansion project will also cover several other passenger touchpoints such as the arrival baggage claim area, immigration halls and transit areas. It is expected to increase T2’s capacity by up to 5 million passengers per annum (mppa) from its current 23 mppa. Works will commence at the end of this year and is scheduled to take up to five years to complete.

Mr Kuah enjoys the challenges in handling such major projects. “Having to deal with multiple stakeholders, I’ve learnt how to engage, ‘influence’ and build goodwill with people. More importantly, I’ve had to think on my feet and outside the box to come up with effective and efficient processes to streamline operations, and to ensure that projects are executed smoothly and safely.”

He believes his background in hospitality gives him a unique advantage and would like others to know that the aviation and aerospace industry is not limited to just pilots and cabin crew.

“Other than the highly-skilled jobs which require specific aviation expertise, there are many other pathways to a career in the industry. For myself, my tourism and events management degree equipped me with useful skills that I can apply at work every day.”

Although he has been with CAG for five years, Mr Kuah’s enthusiasm for his job doesn’t show any signs of waning. “The aviation landscape is very dynamic, and each day brings a new set of experiences and challenges.

“Being part of Changi Airport’s journey of growth has been extremely rewarding, and CAG’s people-centered culture is a bonus. Where else can you do plane- spotting while at work to decompress?” 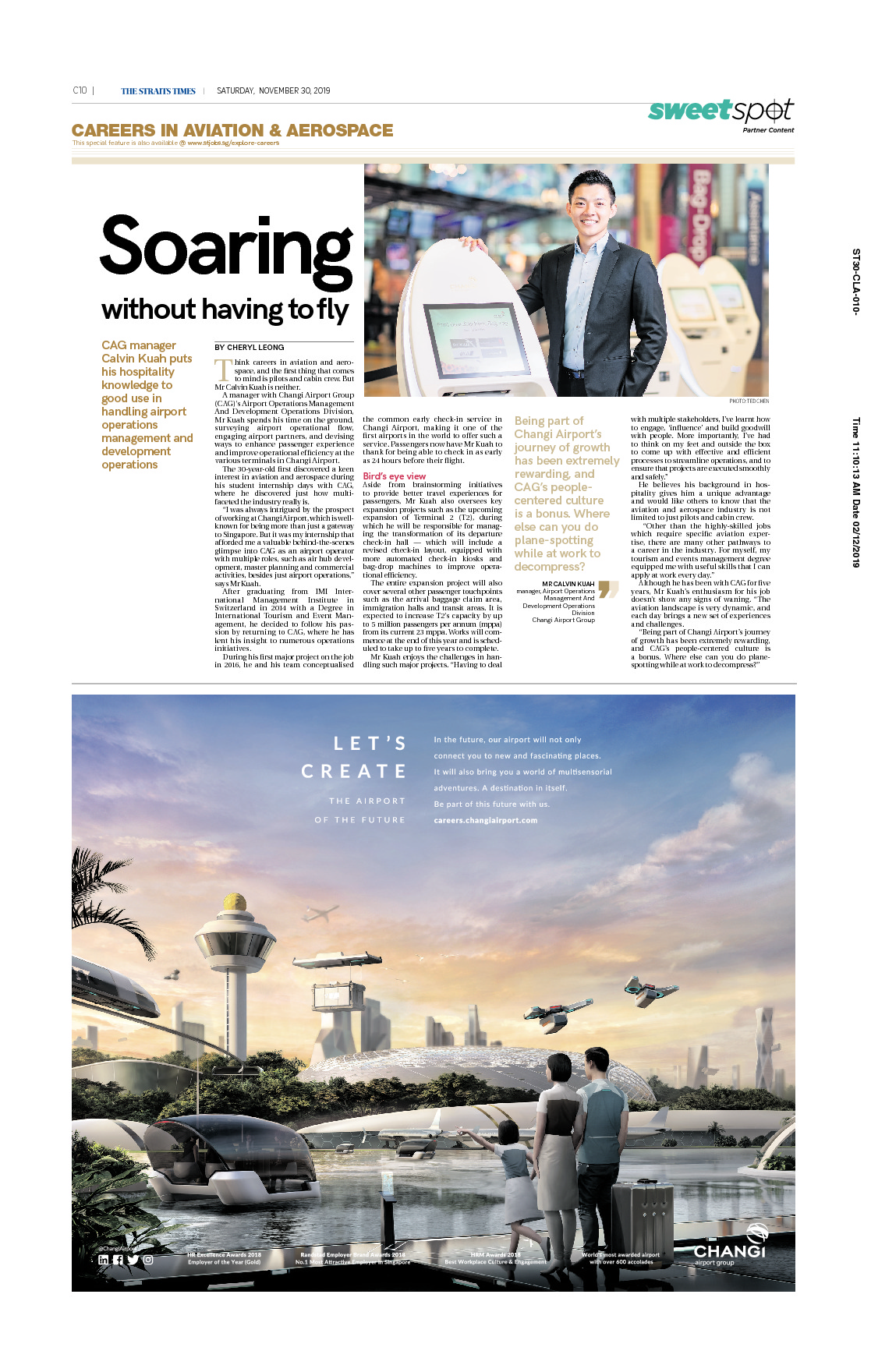