When he joined Hotel Michael as a bell-man, he thought that the job would be a temporary one.

But four years later, Mr Azkhairulzafie Azman— who goes by the name Zafie — is now a guest services executive at the Resorts World Sentosa (RWS) hotel.

In fact, the 26-year-old has risen through the ranks since joining the lifestyle destination resort in 2014 — embodying RWS’s talent management tag-line of “Diverse Opportunities, Rewarding Careers”.

Mr Zafie’s thoughtfulness and positive attitude have won him numerous compliments from the hotel’s guests.

He says: “I strive to see smiles on our guests’ faces when we create surprising or memorable moments for them. It is also most gratifying when returning guests remember my name.”

As a guest services executive, Mr Zafie’s role is to create an environment in which hotel guests feel at home — from the time they step into the resort to the moment they check out.

His story is one of hard work and dedication. After working as a bellman for 11⁄2 years, he was recognised for his capabilities — he was young, energetic and had a natural rapport with guests.

So he was offered the opportunity to join the front office.

From there, his career rise was rapid — he was promoted last year, and again this year. Today, he leads a guest services team of his own.

Currently an acting duty manager for Hotel Michael and Crockfords Tower, Mr Zafie is training to become a full duty manager — a role that involves managing guest feedback and ensuring the day-to-day operations of the hotel run smoothly.

“I have learnt many new things both on the job and from my supervisors at RWS. I love delighting my guests, and so I decided to stay in this industry,” he says.

Always looking for ways to enhance guests’ experiences, he has many anecdotes to share.

One rainy day, a guest was running late for an important dinner.

Impressed by this thoughtful gesture, the guest commended him for going the extra mile.

While he has excelled through his own efforts, Mr Zafie also views teamwork as a vital factor that contributes to his success on the job.

“I am motivated to display more ‘kampung spirit’ — one of RWS’ core values — by working closely with my team and helping one another when the going gets tough,” he shares.

“My philosophy is that it is never a solo effort and we should always work as a team in order to be effective, nimble and responsive.”

To those considering a career in the hospitality industry, Mr Zafie says it is important to be willing to learn about all aspects of the job, and to come to work fuelled by the passion to serve.

He says: “The minute you put on your uniform, the stage is set for you to be the best service ambassador not only for the company, but also for Singapore.” 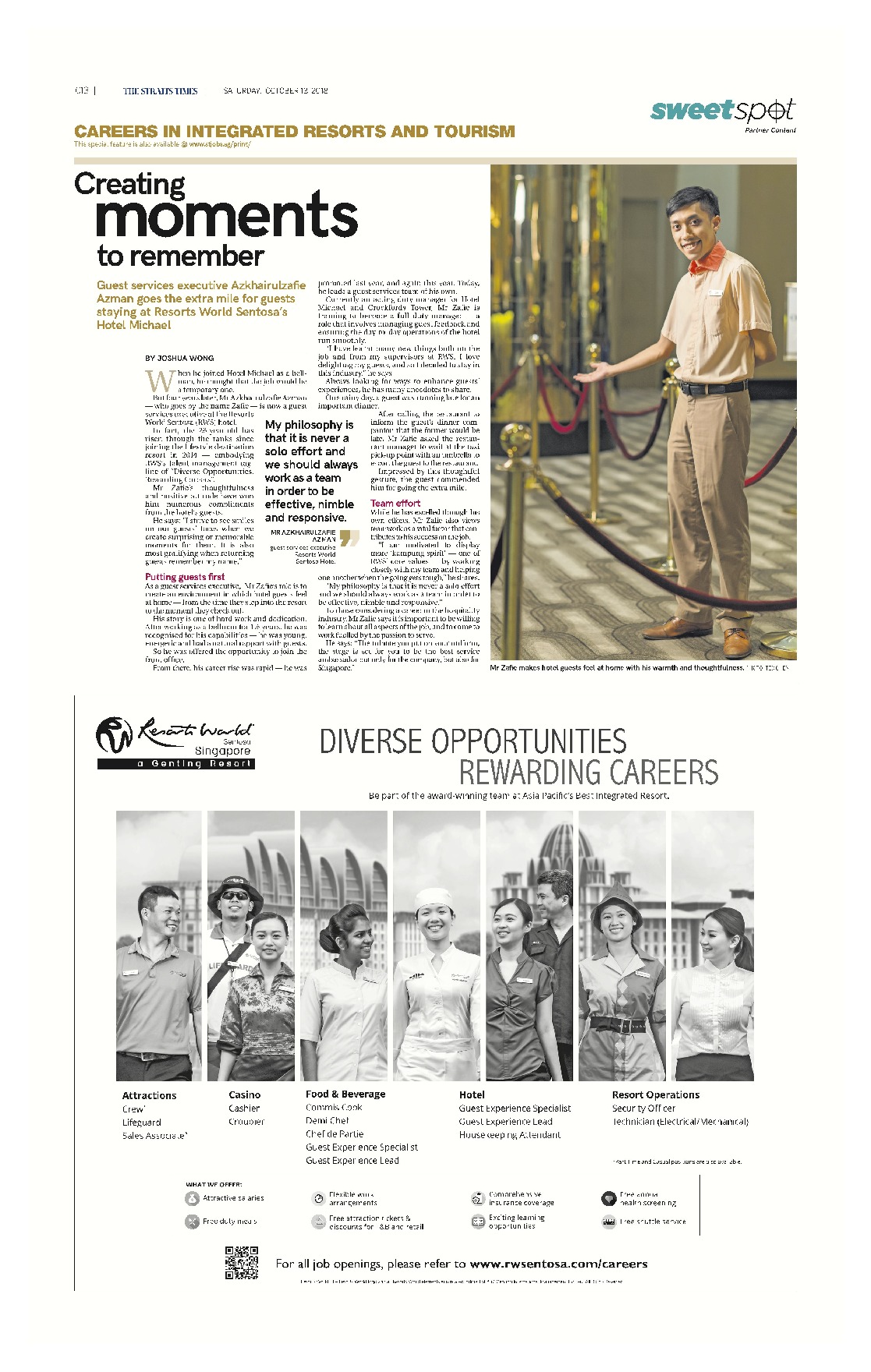